Many scientists agree, general AI is coming. Self aware machines capable of understanding both the world around them and themselves. Will we be overtaken by these machines?

“When we started thinking for you, it really became our civilization.” Agent Smith – The Matrix.

Both robotic scientists and Battlestar Galactica members agree that the AI is coming. While this article serves as some hype for the new Battlestar Galactica TV movie “The Plan” it also discusses some very interesting contemporary AI research along with cybernetics. While we may be overtaken by the machines we may also be able to keep up with them if we follow them in our natural evolution. Replace your brain with cyber enhanced nano-neruons? It won’t be impossible forever.

People are already experimenting with cybernetics, at a simple level but everything has to start somewhere.

Then there is the idea of self aware machines. What does self aware really mean? I won’t go into that topic too deeply the wikipedia article for self awareness is a good start. The robots shown in the following video are becoming self aware, however only in the crudest sense. If we consider all the pieces coming together though, self awareness of body as well as self assembly of knowledge like in my post Game Changer we start to see that the technology is moving towards a general AI from many directions.

Ignoring the Battlestar Galactica hype in the article, it did bring up some interesting points, and gave us a glimpse of how mainstream this technology is becoming. Did I mention… I welcome our new robot overlords?

Virtually every electronic device around has one of these and the technology hasn’t changed substantially in decades.

From your cell phone, to your tv remote, your car to your laptop, they all have batteries. One of the more common types now seen is the lithium ion battery. It works by moving lithium ions around between an anode and a cathode. This is the same process that every other battery follows. Depending on how many ions your anode can store, you can store more charge in the battery.

Now what if you could increase the capacity of your anode by 1000%. Your laptop would could run for 10 hours on a single charge, your iphone could keep going for 8 or 9 days instead of 1, your electric car could have ten times the range all on a single charge. 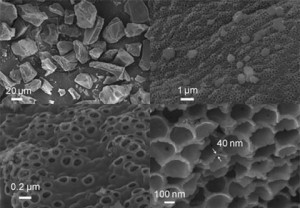 Researchers in South Korea have made this a reality. Li-ion batteries with 1000% increase in storage! Their system works by increasing the surface area of the anode by making it extremely porous. Like a sponge holds water, the anode can hold exceptionally more lithium ions allowing for a much more substantial stored charge.

Consider the possibilities this holds for nanotechnology. Right now scientists are constructing tiny devices but the restricting factor is the battery, it can’t hold a charge for the tiny device to function for any length of time. This increase could allow a 5 minute charge to last hours or to provide the power to become far more effective. Wireless sensor networks restrict broadcast functions as much as possible because they are cost expensive. This would allow those nets to function much more effectively.

That is just one application. Now that they know this can be done, the race will be on to make even more capable anodes, we could be on the virge of a battery revolution, something that has been a long time coming.